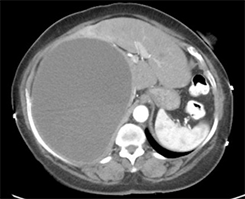 A giant 13 cm liver cyst in the right lobe of the liver containing 1 gallon of fluid. Due to the large size, this liver cyst is causing stretch on the liver capsule, which is responsible for dull debilitating constant pain reported by patient.

Liver cysts occur in about 5% of the general population, and up to 10% of those will develop symptoms such as pain, nausea, discomfort, bloatedness, early satiety, and weight loss. Percutaneous or laparoscopic liver biopsy should not be done to diagnose a liver cyst. Percutaneous aspiration and drain placement by an interventional radiologist is not recommended since it is associated with an almost 100% failure rate. The hepatic cyst fluid quickly reaccumulates after a percutaneous aspiration with recurrence of symptoms. When a liver cyst becomes large, it stretches the liver capsule, which can cause the above liver cyst symptoms. Liver cysts can be singular or multiple, and they can occur anywhere in the liver.
Primary care physicians commonly order right upper quadrant ultrasound as the initial diagnostic imaging for hepatobiliary diseases. A high-quality CT scan is required for further evaluation when an ultrasound reveals abnormality within the liver, biliary duct, or gallbladder.

Most liver cysts contain clear straw-colored fluid, but some patients may bleed into the cyst causing sudden right upper quadrant pain or shoulder discomfort. In these cases, the severity of liver cyst symptoms often triggers a visit to the emergency room.

While most benign and or symptomatic cysts do not require immediate surgical intervention, liver cyst treatment involves removing a large portion of the cyst wall (unroofing/fenestration), followed by an evaluation by a pathologist to identify or rule out the presence of premalignant cells within the cyst wall.

To avoid cyst recurrence, some patients require partial liver resection to remove a small part of attenuated liver parenchyma. This is especially true for hepatic cysts located in the right lobe of the liver or the dome of the liver against the diaphragm. When the hepatic cyst unroofing surgery is not done adequately, about 15% of patients experience recurrence of cyst and recurrence of symptoms. Rarely, a formal liver resection removing the entire right/left liver lobe is necessary. It is crucial to see a liver surgeon/ liver specialist for a surgical consultation.

An experienced liver surgeon can detect symptoms of a complex hepatic cyst (thickened wall, hypervascular wall, hypervascular septae within the cyst cavity), which indicate potential premalignant changes. Communication with the biliary tract is also important to recognize in order to avoid bile leak after the hepatic cyst surgery /resection. If premalignant or malignant cells are found in the resected cyst wall, formal liver resection is necessary to remove the cyst wall altogether. This operation is done using similar techniques as liver cancer surgery. A robotic minimally invasive liver resection is our preferred method for malignant or benign liver cysts treatment, which results in shorter recovery, minimal potential complications, and excellent outcomes. 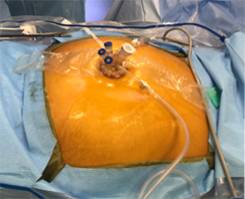 Dr. Iswanto Sucandy performs this operation laparoscopically via a small, scarless single incision in the umbilicus. Most patients are discharged on the same day. Only a small number of patients require an overnight stay in the hospital, generally related to other existing medical conditions. At three months following the laparoscopic hepatic cyst unroofing/resection, a CT scan is obtained to confirm the resolution of the hepatic cyst. Complete hypertrophy of the remaining liver parenchyma is also expected.