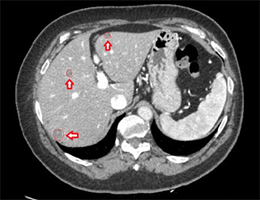 Metastatic colorectal cancer to the liver are often time multiple in nature. The lesion present as a hypodense mass within the liver (red arrows). Liver resection to remove these tumors has been proven to increase overall survival in addition to systemic chemotherapy

The liver is the most common location for tumor metastasis from other organs. The most common cancers that metastasized to the liver are colon and rectal cancer, followed by pancreatic, neuroendocrine, soft tissue sarcoma, breast, stomach, esophageal, melanoma, renal cell carcinoma, ovarian, and uterine cancers. For colon and rectal cancer, the venous drainage follows superior and inferior mesenteric veins which drain into the portal vein and subsequently into the liver.

Cancer cells from colon and rectal cancer are shed into the mesenteric venous blood stream and they can be found in the portal vein. The right lobe of the liver receives slightly higher number of metastasis, when compared to the left lobe. Liver biopsy either percutaneously or surgically is often performed to confirm the diagnosis.

Approximately 50% of patients with colon and rectal cancer develop liver metastasis. Eventhough cancer has spread to the liver (stage IV disease), the condition is often still curable with liver resection and or microwave/radiofrequency ablation, in addition to systemic chemotherapy treatment. Without treatment, median survival of colorectal cancer liver metastasis is only about 12 months. With systemic chemotherapy only, the median survival is prolonged to about 2 years.

In order to achieve a long overall survival and best oncologic outcome, any colorectal liver metastasis should be resected, whenever technically feasible. Systemic chemotherapy is then administered after the liver surgery to decrease the likelihood of tumor recurrence, both intra and extrahepatically. Most colorectal liver metastases are multiple and they may involve both right and left liver lobes. Currently, there is no maximum number of liver lesions that can be resected as long as adequate future liver remnant volume can be preserved. Combination of liver resection and microwave/radiofrequency ablation is often applied to preserve as much as normal liver parenchyma as possible.

This decision is made by a liver surgeon preoperatively and confirmed intraoperatively after a systematic ultrasonic examination of the liver. This is why, experience in liver surgery is important to achieve best outcomes. For patient with multiple liver metastases, sometimes a 2- stage liver resection is indicated to avoid postoperative liver failure. In the first stage, one lobe of the liver is cleared from any tumors with liver resection, followed by a contralateral (opposite side) portal vein embolization/ligation to induce future liver remnant hypertrophy. After about 3-6 weeks, a CT scan is conducted to measure the volume of liver remnant hypertrophy. The second stage is then began with a formal liver resection of the deportalized lobe, removing the remainder of the colorectal liver metastases. Liver transplant surgery is not offered for this disease due to poor outcome.

When the colorectal liver metastasis is discovered at the same time as the primary colon cancer, this condition is called synchronous liver metastasis. About 35% of patients present with synchronous liver metastasis. After administration of neoadjuvant systemic chemotherapy for about 3 months, the primary colon cancer resection is often performed simultaneously as the liver resection or liver radiofrequency ablation. Using this approach, the patients only need to undergo a single operation, which is associated with much shorter postoperative recovery and earlier resumption of systemic chemotherapy. This can even be done both minimally invasively using the robotic approach. This combined operation approach is clearly the upcoming new goal standard in the management of synchronous colorectal liver metastasis. Many centers in the United States have adopted this new approach.

Dr. Iswanto Sucandy routinely undertakes robotic liver resection for metastatic colorectal cancer to the liver, frequently during the same operation as the primary colon cancer resection (combined colon and liver resection). In other words, Dr.Iswanto Sucandy works with his colorectal surgery partners to accomplish both colon cancer removal and the liver resection simultaneously, using minimally invasive robotic technique. Dr. Sucandy had published a journal article describing clinical outcomes of this approach in American Surgery Journal. It is important to seek a surgical consultation with an experienced liver surgeon or liver specialist in your area.