Mucinous Cystic Neoplasm of the Liver

Mucinous Cystic Neoplasm of the Liver 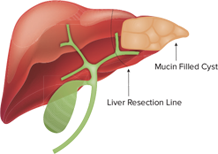 Mucinous cystic neoplasm of the liver is an uncommon premalignant cystic lesion, which accounts for less than 5% of all intrahepatic biliary cysts and occurs primarily in middle aged woman with a peak incidence in the 50s. The most classical primary cystic neoplasm of the liver is cystadenoma. Being of biliary tract origin, cystadenoma may occur anywhere along the biliary system, including the hepatic duct, cystic duct, or gallbladder, but the most frequent location is within the liver (>80%). It has been reported to develop equally within the right and left lobe of the liver. This tumor is well known to have inherent risks of malignant transformation into bile duct cancer, which has a poor prognosis. Early diagnosis is thus very important.

Diagnosis of this lesion can sometimes be difficult and often mistaken with a simple hepatic cyst. Many primary care doctor/gastrointestinal physician misdiagnose the cystadenoma as simple hepatic cyst and proceed with observation. Typically, the patient starts with a diagnostic workup of an abdominal ultrasound for right upper quadrant discomfort, where a cystic lesion is found. A further contrast CT scan shows cystic lesion with a thin wall and septa that enhance after injection of contrast agent. The patient was then referred to see a liver surgeon or a liver specialist.

The internal surface of the cyst is typically smooth and it usually contains clear to mucinous fluid. Thick gelatinous fluid form the cyst is consistent with mucinous cystic neoplasm diagnosis. Hemorrhagic (bloody) fluid may also be present and this should raise the suspicion of malignancy. A bilious (mixed with bile) content is unusual, however fistulization/connection between the cyst and the biliary tract has been reported. If solid areas (polypoid lesions/polyp-like growths projecting into the lumen) are present, a high concern for an invasive component is exercised.

Due to the potential for malignant transformation to become a cystadenocarcinoma cancer, mucinous cystic neoplasm of the liver requires a surgical removal via liver resection. Minimally invasive technique with laparoscopic liver resection or robotic liver resection is preferred, when expertise is available. Only few centers in the United Stated that offer minimally invasive liver resection routinely. In Tampa Bay Area, Dr. Iswanto Sucandy performs robotic liver resection routinely for this type of liver mass. Most patients only require 2-4 days of hospital recovery. It is important to avoid rupture of the cyst and spillage of cyst contents into the peritoneal cavity. Therefore, experience in liver surgery is important to achieve best outcomes. When the cyst contents spill, the premalignant/malignant cells may become implanted/disseminated in the abdominal cavity.

It is important to differentiate mucinous cystic neoplasm of the liver from hydatid cyst parasitic infection. Hydatic cyst is an infectious disease, commonly seen in the middle eastern countries or South American countries, transmitted by dogs as intermediate host. A travel history outside to endemic areas is important during initial evaluation. Diagnosis is obtained via serologic blood test and CT scan imaging showing daughter cysts. Treatment for hydatic cyst is with administration of anthelmintic drugs followed by surgical liver resection removing the hydatic cyst intact. Recurrence is uncommon after a complete treatment. Dr. Iswanto Sucandy has treated several patients with hydatic cyst parasitic infection in Tampa Bay Area.