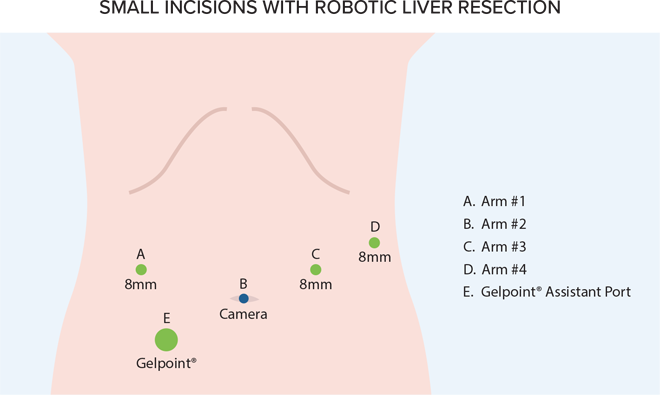 2. Reduced Blood Loss - Most Robotic liver resections we have performed result in less than 100 cc of blood loss. Blood transfusion is rarely needed, even for major liver resections.

4. Minimal Risk for Wound Infection - The probability of having surgical wound infection is significantly lower, less than 1% when compared to open liver resection.

How Robotic liver Operations for Benign and Malignant Liver Tumors are Performed?

The liver consists of 2 lobes (right and left), which are further subdivided into 8 segments. The primary objective of curative liver resection is to remove the tumor with negative margins, while preserving as much as functional liver tissue as possible. Blood vessels (in and out of the liver) and major bile ducts must be properly identified and handled appropriately for a successful outcome. Intact blood vessels and bile duct are required for the remaining part of liver to function well after surgery. Liver tumors located in the periphery can be removed with a local resection. Larger tumors or tumors located deeper in the liver often require more extensive/formal resection.

Both minor and major liver resections can be done robotically. Minimally invasive liver resection is preferred over the traditional open operation whenever technically visible, determined by the operating team.